So, we headed inland in the pouring rain. After driving through the tree I knew that the 101 was next. I wanted to avoid any major roads so we took a look at the map. “Avenue of Giants.” It sounds like I should know what that is... hmmm. Let’s check it out.

You might want to hit play and listen to this as a background. My car is in no way this loud, but the tone is the same. I love it.

When a car sounds this good, you don't need much else. Read on roadandtrack.​com


I feel like we might be in a fairytale. Given the time of year and the downpour of rain there was no one around! It was amazing.

In some areas it actually looked fake.

Condor looks like an RC car. It was amazing.

Gratuitous car shots, thankfully this is a car blog.

We spent the next couple hours meandering along this road and taking other side roads to avoid much of the 101. We stopped and had lunch at a campground surrounded by these giants with no one else around. That was my favorite moment of the trip so far. Standing under a small park overhang to stay out of the rain. Surrounded by giant redwoods. No sounds except for rain. No one except for her. Condor sitting there happily, almost looking proud of himself for how far he’d come... I dumped in another quart of oil and we headed back to the coast and Eureka.
I like California, obviously, but it was nice to get to Oregon! This was now all new road to me and I couldn’t wait to see what it looked like.

It did not disappoint!

Sneaker waves are like landsharks. Never let them in.

How would you like to live at this light house. Yikes.

As you drive along it’s startling how rugged the coastline is up here. Treacherous for any ships, that’s for sure.

We found a local brewery on a side road and decided to stop.

The tasters were good! It’s a very small brewery and it’s so remote that they said none of the bottling or canning companies would travel all the way to them. So, they sell it in keg or growler form only.

So after the short tour and explanation of how it all works, I need to start home brewing, we asked him where a good place to eat is.
“Well, there’s just one place in town and we’re going there for dinner so I’d recommend it!”
Haha!
Who would think that this little shack called the Hunter Creek Bar and Grill would be the best meal of the trip??

It was. Nothing fancy, but it was fresh, delicious and dirt cheap. We both looked at the bill and realized it was about half of what a really bad burger and fries had cost us at our last stop in California. Welcome to Oregon prices. WOOHOO!
So, we continued putting up the coast. On a small “scenic” sideroad we saw this. Simple, but it looked clean and it was on the beach so we decided to check it out.

Perfect, we have our home for the night!
The beach is empty, as we’ve gotten used to. It looks like a painting. Thankfully the wife is a great photog! 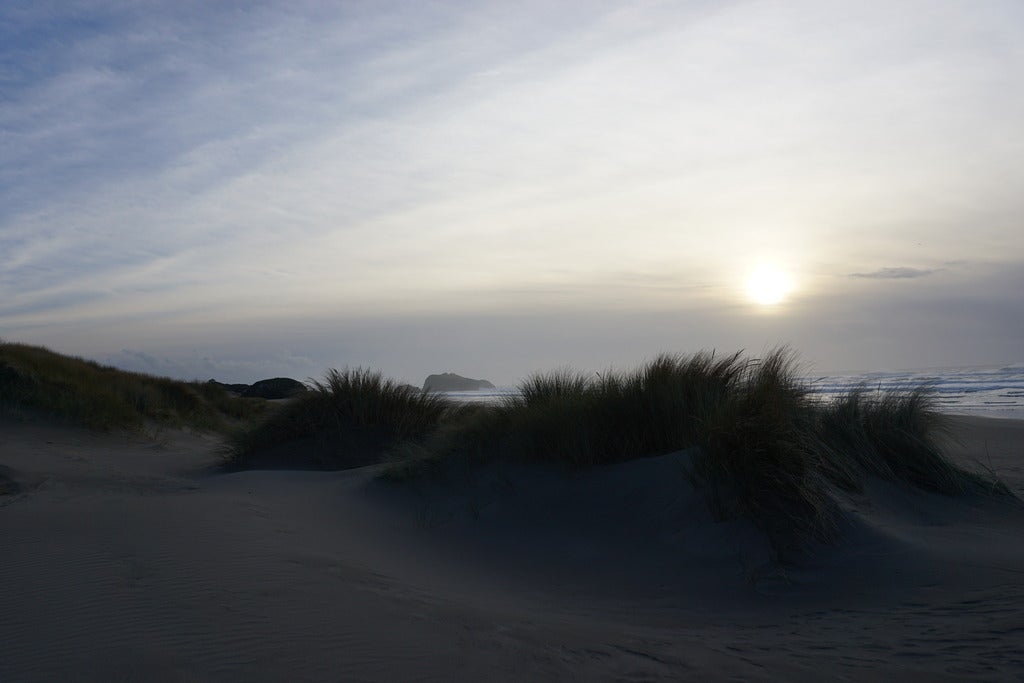 Hiding from the wind.

Picturing this big of a tree on the beach blows my mind. How long ago was it here? Looks like it was saw cut. hmmm.

Good morning!
What a view.

Let’s go.
There is something about driving in the morning. The silence, the light, the shadows, the engine noise, windows down, the lack of other traffic. It’s sublime.

Not long after starting we passed this Navy Communications base on a small rock outcropping. What a chunk of real estate to have a base. Wow.

You can’t drive PCH and not get a photo of Bixby bridge. I stop every time I’m here. In fact, as I was taking this picture a flatbed tow truck with a rental car on the back stopped and a guy jumped out! He ran over, took a pic of the bridge and got back into the tow truck. See, I told you you COULD NOT do this road without a pic of the bridge. 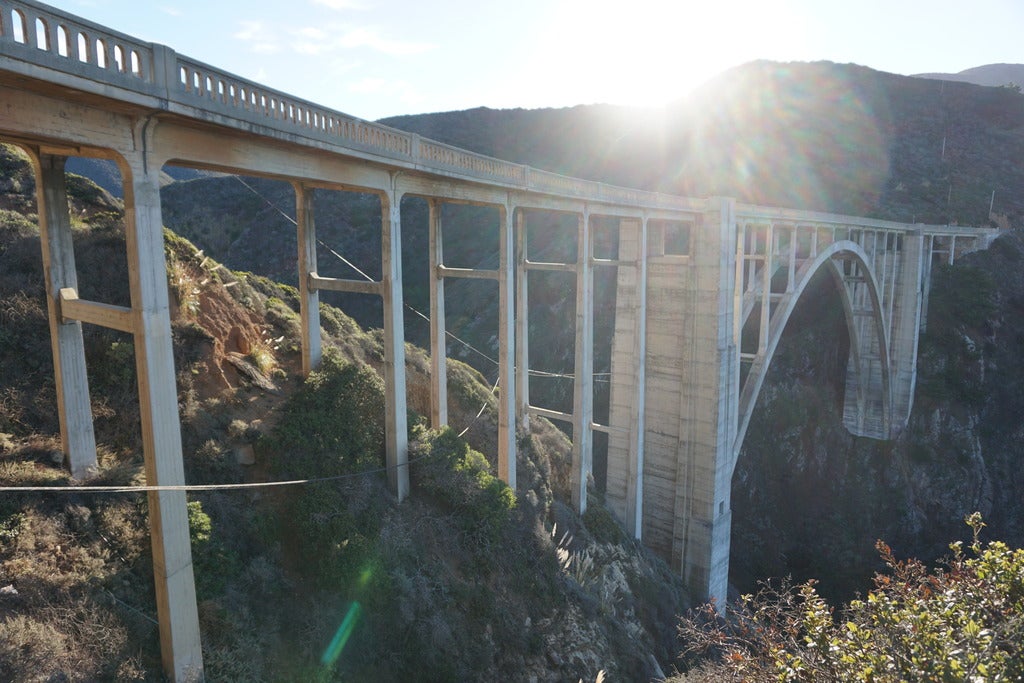 There were quite a few of these lighthouses along PCH. We didn’t realize at the time, but most of them are Hostel’s now. Someone later told us that this one has private rooms you can rent and one had a hot tub along the cliff. WHAT?! Next time.... next time.

The tower with the “whale blubber” processing house down in front. It’s gone from being lit from whale blubber, to kerosene and now to electricity.

We spent the night near Half Moon bay. No camping was open so we spent the night in an especially bad hotel. Roaches, holes in the wall, good times... Oh well, we’re cheap and most of the funds had been spent on the car and marriage stuff so we were fine with it.
The next morning we hit up San Francisco. We did lombard street and have a lot of it on video (Video will come later, I need to edit it).

Primarily being “offroaders” we like SF, but wanted to get away from people so off we went! We got back to PCH and it was amazing. Quite a perfect section!

Eventually, we found a place to camp within some trees.

We watched a Hawk dive bomb some quail unsuccessfully.

Then we grabbed a beer and headed for the beach.

Oh deer! Time for my impersonation of the great white hunter.

Come here! Give me a hug!

Okay, they left. It was a trip seeing deer on the beach. That doesn’t happen to often in Southern California.
Another deserted beach. Perfect.

The next morning we woke up early because the winds were whipping the tent around. Within 5 minutes of loading the car up the sky opened up! It didn’t stop raining until the next day.
Goodbye Pacific Ocean, for now. 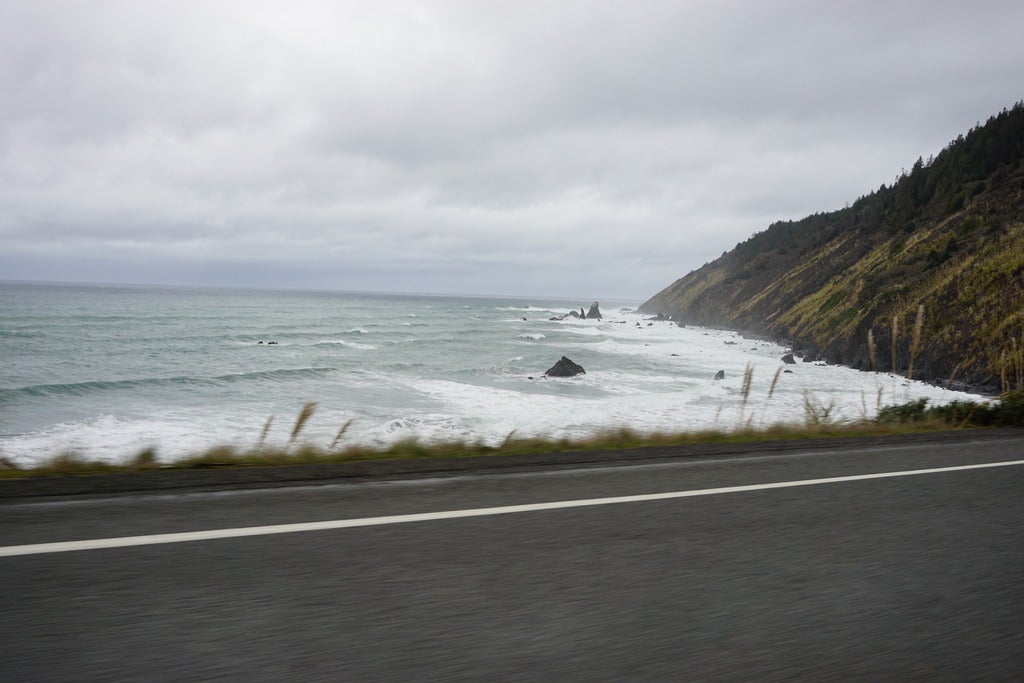 This looks fun! I’ve done this road on a motorcycle, but in the wet with a cover of fallen leaves... hmmm

After feeling a little slippage I took it down a notch.

This is a great road.

As I was with my former car with Michelin Pilot Sports, I am impressed with these.

What’s that? A tree to drive through for $5. Okay!

A landrover Series II behind us? Yes, I’ll have to get a pic of that.

Turns out the trucks name is Winston. He is being driven from Seattle down through Norcal.

Not quite gonna make it! Maybe with a soft top and 5PSI....