It was one of those kinds of days. We woke up next to the river with absolutely no hangover, WHAT SO EVER. We didn't spend the night walking to the place that cooks a steak over a hot fire on a swinging grate. http://www.yelp.com/biz/swingin-steak-mexican-hat

Waking up next to a big river, surrounded by redrock, with only a few German tourists nearby to spoil the otherwise still morning is a wonderful thing. There is something about knowing that every single mile you are about to ride today is beautiful that makes you feel like a kid on Christmas morning. So, Merry Christmas, let's head to Monument Valley, AZ.

The roads were nice and quiet this time of the morning which is exactly how you want to see Monument Valley. Nothing can compare to how early Native American's and Settler's saw it, but do try to avoid the crowds and buss convoys that often evelop the weekends.

As you leave the Reservation you start to gain elevation until you get to Flagstaff. In the background Mt. Humphrey's and the highest point in Arizona looms. 12,633 Feet. Biker Wave.

Once into Flagstaff we stopped and lounged on the top deck of the old Hotel. It still looks exactly the same today. The top deck was closed, but they allowed us to take our food up stairs and just watch the town roll by below for a while. 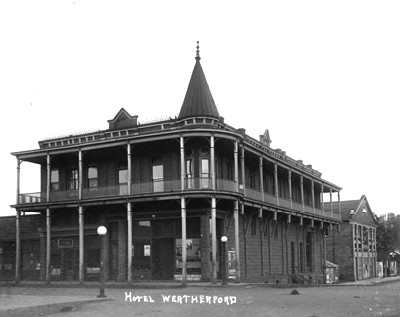 We decided that spending a night in Williams would be fun so off we went to Route 66.

Train country. (although it looks like some sort of denim commercial.)

FJ40 on TV and a stuffed Mountain Lion on the wall. This seems like a good place to post up! Sultana!

Well, isn't that fancy of them.

I recommend eating at any place with a roof top patio in Williams. The food will be "good enough", but the views will be worth it all. Williams is a mish mash of a town. Part historical frontier town. Part railroad town. Grand Canyon Jumping off point. Tourist Trap. Route 66 history. Route 66 kitch. Part lumber town. This makes for an interesting mix of people from all over the world and from all different walks of life. All of this in an impossibly small town trying to do all of it's business in the summer months. Unless of course, you go there to ski... http://www.elkridgeski.com/

Canyon Club. This is another gem not to be missed. Ask if you can borrow a flashlight and go look at the caverns beneath the bar and rest of the town that the Chinese Train workers built.

At night the town calms down in terms of tourists and livens up in terms of drunk locals. It's entertaining if a bit scary.

Since we saw a line of Japanese tourists getting a picture with the Porcelain King, we thought it was only prudent to do the same.

There are a few good stories from this night that I'll tell ya around a camp fire sometime. There was a local guy who said he had "Indiana Jones like whip skills" who proceeded to stand in the middle of route 66 trying to crack dual whips un-successfully for a while. An 1800's theatre is not only a great place to grab a mic and do an impromptu concert, but is also a great place to sleep. Whatever you do, don't eat here... Seriously. Starve to death. Don't go here... http://www.yelp.com/biz/jessicas-family-restaurant-williams The next day we cruised through Chino and Paulden into Prescott. (Preskit) We laid in the park and slept for a while before saying our good buys to the California contingent and heading back to Phoenix for some much needed rest and recovery. It was, as the all are, a great trip.

What's that? You have special bags to carry your camp trash on a motorcycle. Neat, we have duct tape.

This road takes you right along the backbone of this rock outcropping. Impressive at and times a bit puckering to say the least. Now is NOT the time to high side it.

We gained elevation until we were COLD and at over 10,000 feet.

What a change from the heat of the high desert and red rock.

Back to the redrock we went.

These canyons were like being in a video game. I couldn't imagine a road that I'd rather cruise along daydreaming on.

Here is Jon doing just that:

It seemed like every 5 miles the terrain and colors changed completely.

Gotta stop here! The last time I was here was in the Landcruiser while exploring the remote parts of the Maze District.

Literally every spot looks like a nice place to stop. Eventually we found one that was just a bit better than the other pull outs.

I have been dreaming about riding this section of road on a motorcycle since I first drove it in my Landcruiser.

Another one just for good measure.

This remote gas stop was still cheap compared to what the California guys were paying at the time.

The Moki Dugway. A little dirt roading on Harleys.

It was a bit slick at spots.

Finally after a long day in the saddle we made it to Mexican Hat, UT. Our spot was right on the river and we were more than happy to relax.

So, it was time for another motorcycle trip. I got the guys all excited about the epic roads and sites of Southern Utah so off we went. Jon and I headed out of Phoenix and made our way through Flagstaff on to Lee's Ferry. It was a long haul to get in after a full day of work, but well worth it. Not off the beaten path, but a nice place to wake up none the less.

This is the jumping off point for the Grand Canyon rafting trips as well as several Fly Fishing operations. It's not a bad place to be.

Time to make hay. We hit the highway and headed for Utah. We had a pretty long ride just to meet up with the other guys in Zion so we had to ride without too many stops.

The views in Northern Arizona are epic. This part of Arizona is like an island being separated from the rest of the state by the Grand Canyon and Colorado River.

I love quiet roads. Thankfully there weren't any cops or RV's to spoil this ride. Jon says HI!

Sometimes it's amazing what shots you can get while moving along at a pretty good clip. This is all along the Vermillion Cliffs area.

Bubble Shields = Less Bugs in your face. This is a good thing!

Only in the Southwest can you go from Grasslands:

To Pine Trees in less than 10 miles=

We made it to Zion and had some breakfast with Chris and Jeremy. The Group was complete. 3 aircooled Harleys and 1 70's era airhead BMW. This should be interesting.

Did we push start the Beemer from where it sat in this photo? Maybe, maybe not. I won't say for sure....

Zion is a beautiful ride except for 1 thing... TRAFFIC. Depending on the time of year and time of day you may want to plan on doing about 10MPH through the entire park. There is no way to pass or be in a rush so we just put it in first gear and took in the sites. (ATGATT, I know...)

The tunnel is now 1 way only, thanks to some great drivers making stupid choices I'm sure. Expect to wait, and sit, and wait.

Right when you think you are done waiting, you wait to leave Zion.

The area between Zion and Bryce is amazingly beautiful and lacks the traffic and congesting of Zion. We were in heaven.

Some roads just need to be done on a Motorcycle. The road to Bryce Canyon is one of them.

After making it to Bryce we took a bit to sit back and relax and just take it all in. So good.

It's staggering the number of "Hoodoos" in the park.

On to tonights campsite we rode. We wanted to get away from the tourists and RV's.

Some of the best motorcycle roads in the world!

This little water crossing wasn't deep, but the concrete was covered in moss as slick as snot. We both fish tailed through the entire thing.

We sat back and had a few of these.