“This is really one of those all or nothing jobs.” Badump bump.
(Pictured: Nothing, AZ)

The next area I was headed to was Wikieup. If you know the name it’s because you’ve driven from Phoenix to Vegas or vice versa. It’s a fuel stop and not much else along a pretty stretch of road in AZ.

BLM Guy: “Don’t go up that road too far or you’ll run into the Militia’s land. They even have a Blackhawk helicopter. These guys don’t mess around.”
So, this should be fun. I’ll bring some fresh baked cookies or something for my new neighbors, it will be fine.
This time we’d be living in a trailer park again. I much preferred to stay out remotely, but when you need as much fuel, supplies, Wifi contact with home office and team planning as we did you had to stay in touch a bit.
In this area we put up signs and mapped some more. The terrain was refreshingly different that the flat and dry area around Yuma.

You see some staggering elements of scale in nature. In this case, a man made one. The entire white mountain you see is just a small part of the tailings from the copper mine in Bagdad, AZ.

This area doesn’t actually see a lot of tourist action. Meaning, on holiday weekends droves of giant RV trailers with Jeeps, Quads and dirt bikes DON’T show up. Surprising then, that there are so many hundreds of miles of perfect trails. Now, shhh, don’t tell anyone. I ran these small sand canyons for hours. When you’re mapping I’ve said it’s tedious, but once in a while you find that perfect road. This one was it!
It was always in a wash so no changes to the data there, it was the same width so no changes there, we hadn’t been given the GPS Camera’s yet so there was no reason to stop for pictures and so as long as I knew where I was and needed to map I could have a little fun.
:-D So I did.

I kept driving until it spit me out at the aforementioned Nothing, AZ.
Yes, this sign is very very accurate.

Well, we spent some time mapping, pounding in signs and enjoying the outdoors for a few days. Eventually I had to sign a few trails right up to a large white square on the map, which designates private land (“The Militia’s” as the BLM guy called it). Off I went to the area I’d been warned about. I learned after doing this job that even someone like a Park Ranger, BLM person or Game and Fish person rarely know what their talking about as far as what’s down a road, how long it takes or what dangers there might be, but you still have to assume there is some truth to it, so I proceeded with caution.
Once I got to within a mile of the land I came to an intersection. East was the private land, I’d come in from the Northwest, and I was headed Southwest back out. Each road needed a sign. The odd part was that there was a brand new white Dodge dually sitting next to the road to the east. Two guys were sitting there, doing nothing, but watching me. I pounded in one sign, then two, and then three. I was tempted to bring them some cookies, but I chose not to.
As I drove southwest down a seldom used road I wondered if it would take 5 minutes of 5 seconds for all of those signs to be pulled out of the ground after I left. I never did end up back at that quiet trail intersection, but I wondered for a while. Years later I found out that the largest Machine Gun Shoot gathering happens each year out there. I don’t know anything about the group, but they are hardly the secretive group I’d been told about at the time. In fact, I think I’ll go this year.

As is fairly normal with this job, we were told to leave Wikieup. We would return and have some adventures there another day, but for now, we were off.
It was winter so in true Government tradition we were headed to the mountains and a place called Pleasant Valley. It was home to the bloodiest conflict in AZ history, the Pleasant Valley War. It’s a beautiful area with a bit of a creepy history. (There are a lot of more accurate books on the feud, but an entertaining read is the book called “To The Last Man” by Zane Grey. Arizona can feel like a small town sometimes as I know folks who’s relatives were part of the posse who ended the war as well as one friends that’s even a Tewksbury)
You’d see occasional graves scattered related to the feud/war.

This time we were living it up in a Forest Service Cabin. (By cabin, they often mean “An old mobile home that we put Wildland Firefighters in.”) Hey, it was still better than sleeping under a “shoe tree” in Salome.
So, here we were. Thus began the motorcycle portion of my mapping career, in the mountains, in the beginning of winter, with no truck/heater to surround me. Perfect! 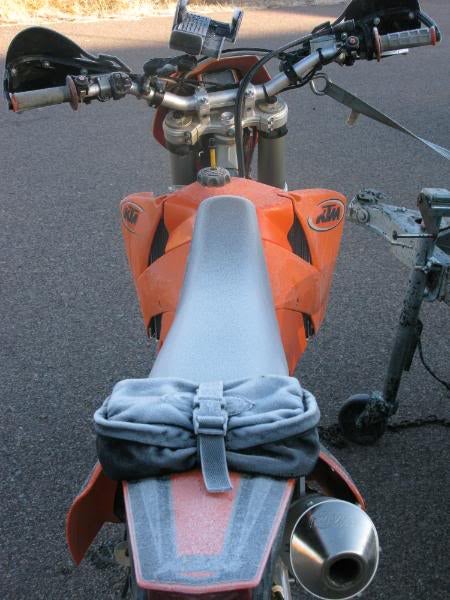 Each morning we’d let everything warm up for a while before heading out. The only problem was that the cold would kill my battery each morning so I’d kick and kick to bring the KTM to life. There were some long mornings!

We would ride at fairly high speeds on graded dirt roads to get to the area we needed to map. I can’t describe how cold this was. Only that you couldn’t actually open your hands once you got there. They were frozen in the curled position around the handlebars while you sat, letting the engine heat warm you up a bit. Still, the views were worth it. 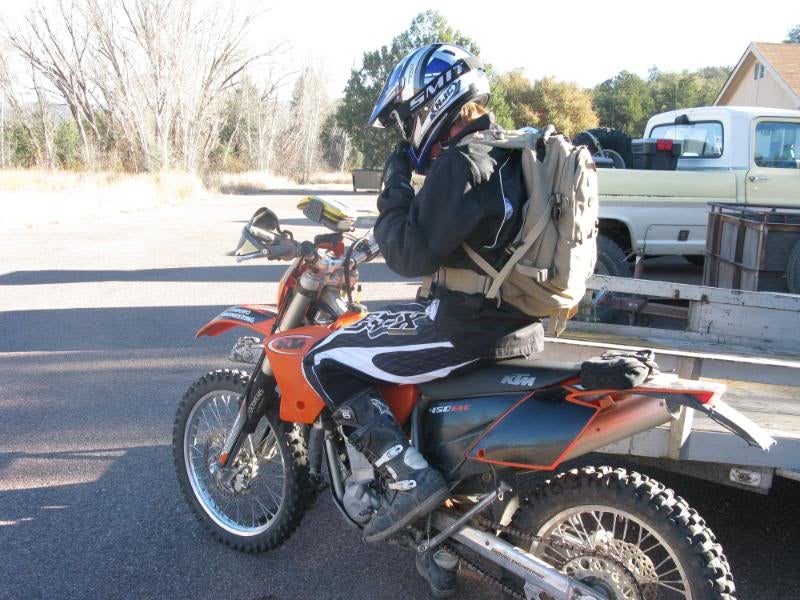 We saw Wild Turkey, Elk, Deer, Bobcats, Coyote and although saw Bear tracks, I was happy not to see one.
Poor pictures, but that’s a Turkey.

My goodness I was bad with the camera back then, but this is the last in a heard of about 14 Elk we saw.

The views around the area of Young and Pleasant Valley were some of my favorites from the years of mapping. It was nice to fall into being a part of the community that had no paved roads in our out of town. Isolated in the mountains. Fridays were pizza night at Antler’s Bar where you had to pre-order your pizza earlier in the week because someone had to go and get enough to make them! Saturdays were steak night at Alice’s and again, you’d better reserve a steak or they would all be spoken for. I loved this small town communal approach to life. We all did.

So, the guys told me it was my icecream day. Go to Phoenix, grab a new shock, check your mail, say hello to your girlfriend and then come back tomorrow night. We’ll cover for you.
And that’s how it worked. We all worked our tails off, but on occasion, for some unforeseen reason, everyone would eventually get an icecream.
Speaking of working in the truck again. Here was the basic setup.

Company Spot, Personal Spot, Satellite Radio, Car Radio, Ham Radio, (not to mention the unpictured Gvt GPS and maps, and Lulu, the hula dancer, all a critical part of mapping.

After driving down a trail so tight that it flipped both my mirrors back, then it even started to pull off what was left of my fender flares. It was terrible to listen to, but this was work so I just turned up the music and kept driving. Finally I came to this old cabin with a mine at the back of it.
Some old prospector lived and worked all in the same small spot.

You know it’s remote when glass is still intact.

At your back door, the office.

The birds and rats had been living here for a while, but it was still in remarkably good condition.

I would sometimes wonder how many fence gates I’d opened and closed. Was it hundreds or thousands?

One day I found this sketchy old road leading down to a watering hole. It was a tight fit with the fallen rocks along the uphill side, but it was worth it.

That was one of my favorite lunch spots. I’ve never seen another person here and each time I’m hard pressed on remembering how to get back!

The most common man made thing you see are roundup corrals. They are all over and most look like they fell out of use 50 or 60 years ago.

Here’s is a one way door, still in use.

Of course, lots of sporadic cattle to go with them. These couple are hanging out in the shade of some Alligator Juniper.

Thanks for tagging along while I relive these “good ol days.”
Next time we head into an interesting area to map. “Don’t breath in the dust and don’t stop very long and you should be fine” they said...